A large scale Laravel application needs a few different services to operate properly. Kubernetes allows us to horizontally scale each of the services. We can achieve massive scale without any code changes while maintaining full control over our infrastructure.

Your infrastructure is stored in code allowing it to be easily upgraded or recreated.

How to install a development setup

We’ll start out by learning how to run a miniature cluster on our own computer. Then we’ll move to a production setup using a cloud provider.

First you’ll need to install docker for working with containers. Docker includes a container runtime and tools to build containers. Head over to https://www.docker.com and install the latest stable version.

Next, install Minikube. Minikube is a development focused Kubernetes cluster that you can run locally. It’s not production ready but it’s perfect for learning and testing. Available here:https://minikube.sigs.k8s.io.

After installing, start it with: % minikube start --vm=true █

And finally install kubectl. Kubectl is a command line tool that allows you to interact with a Kubernetes cluster. You’ll use it in production and development. A cluster and the authentication details needed to access it are collectively known as a context.

The 3 files are Dockerfile, nginx.conf, and index.html.

Dockerfile contains the instructions for Docker to build the image.

We’ve successfully built and run a container in docker, next we’ll run it on Kubernetes.

Running the container in Kubernetes

Now to run the container in Kubernetes, we’ll start to touch the surface of infrastructure as code.

We need to create a deployment file which instructs Kubernetes on how to run our application.

The important parts are the image name which needs to match the tag we gave in docker build, the imagePullPolicy, and the selector: matchLabels which will be used for networking later. 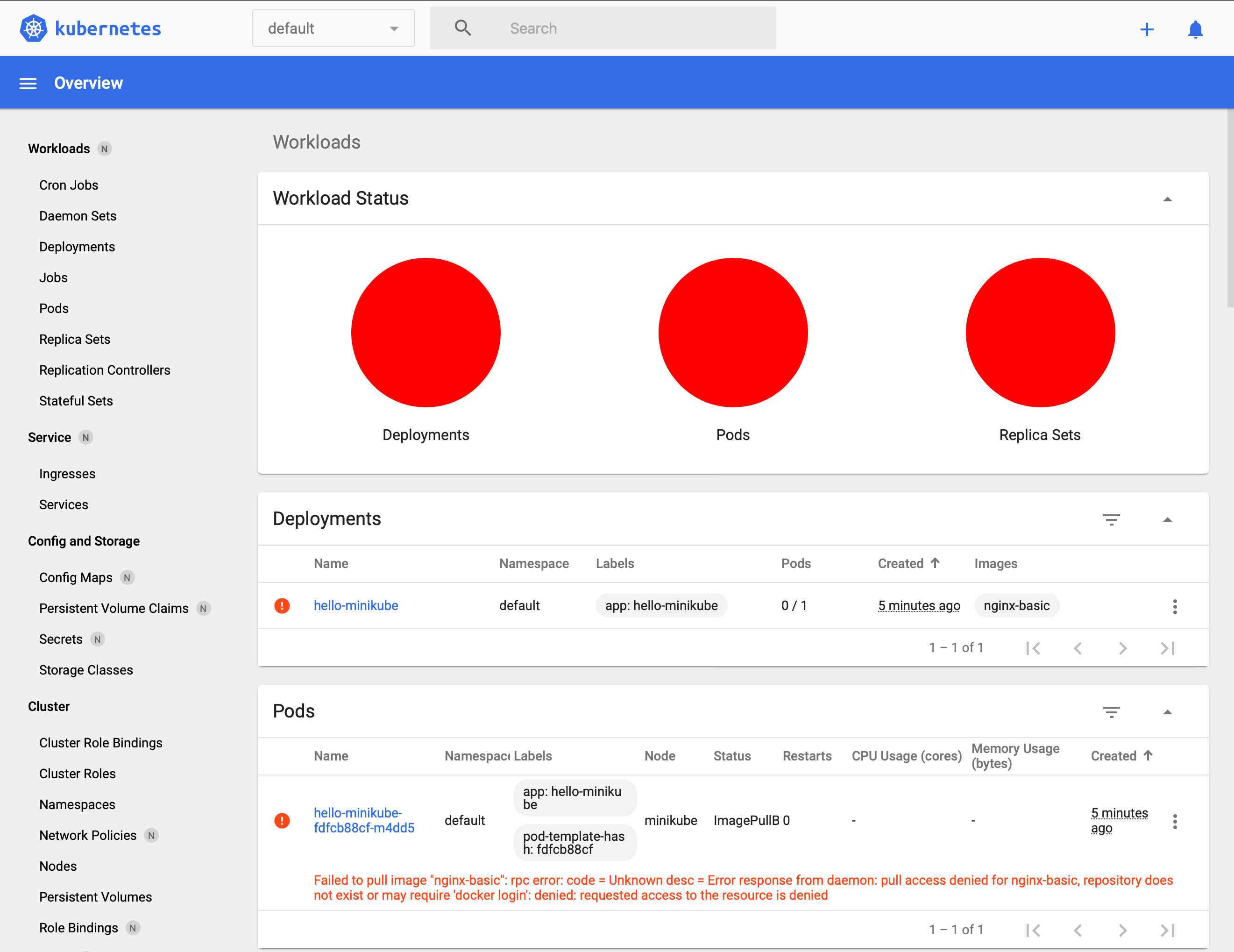 Everything is red, this doesn't look good. Click one of the small red dots to reveal the message about what went wrong.

So how do we get our image in there? We have to switch our command line’s environment to access Minikube's docker. Run % eval $(minikube -p minikube docker-env) █

Now we can build our image with % docker build . --tag=basic-nginx █ .
Since we’ve switched docker environments, now it’ll be available to Kubernetes.

Delete the old deployment then run the same deploy command again. We should have all green lights in the Kubernetes dashboard now.

Our container is running but we need to create a service and an ingress to be able to access it. We’re building from the ground up, so we’ll start with services.

A service is how we expose a set of pods to the network.The service knows where to route by matching its selector to the deployment’s matchLabels.

In this example, the port routes traffic internally to the same port it exposes externally. Different routing configurations are possible but this is all we’ll need.

An ingress is how traffic gets from the outside world into the Kubernetes cluster.

Now we can create the ingress resource.The rules match the request so different requests can be routed to different services. We’re matching all requests prefixed with "/" and routing them to our service named ‘nginx’.

Wait until our ingress is ready with an endpoint ip address. It can take a couple of minutes. Run % kubectl get ingress █ and when an address is shown, navigate to that IP to view the output from the container.
NAME CLASS HOSTS ADDRESS PORTS AGE ingress <none> * 192.168.64.4 80, 443 2m
It can take over a minute for the address to be filled. If it doesn’t come up, something else is wrong. Join the Discord server and let’s figure it out!

You can delete deployment we created here. We’ll be creating a new one that can handle php. The service and ingress can be reused.

We’ve used Nginx to serve a static asset, now let’s use it to serve a php-fpm container.

First create a new Laravel application and in the root of that directory, create a file called Dockerfile.Make sure your docker environment is set to Minikube as before.
Run % docker build . --tag=laravel-php █ from inside the Laravel project's directory with the new Dockerfile.

The volume exists in the Minikube virtual machine. You can access it by running % minikube ssh █ then % cd/tmp/hostpath-provisioner/default █

Next include the shared volume into the deployment.Deploy by running % kubectl apply -f php_deployment.yaml █

This strategy isn’t perfect because each time a pod is created, it copies the contents to the shared directory. This can cause unexpected downtime. Shared volumes are also problematic when using multiple nodes. We’ll solve that when we get into the production environment.

If you tried to access through the ingress’s endpoint, you will receive a 503 error. We still can’t access our application because php-fpm doesn’t know how to handle HTTP requests. For that we need an Nginx reverse proxy.

In our basic Nginx setup earlier, we used docker to build an image of Nginx with the configuration file added. This time we’ll add the config file in using Kubernetes. That allows us to more easily manage the configuration.Pay attention to fastcgi_pass php:9000;. ‘php’ references a named network location which we will create with a service. Data is passed to it using port 9000.

The last thing we need to do is create the Nginx deployment with the configuration file and the shared volume.Deploy by running % kubectl apply -f nginx_deployment.yaml █ .

Browse to the address given by the ingress and you should see the Laravel start page. That’s it for a very basic setup.

In the paid production guide, we’ll dig into a fully fledged production setup covering Redis, MySQL, Horizon, and Laravel’s scheduler. We’ll run CI/CD using Github Actions and a zero downtime deployment script.
Learn how to run and scale your site in production.
Start Today for $99.
Get Started
​
Questions? Contact me on Discord or admin@kubernetesforlaravel.com
Kubernetes For Laravel
© Copyright 2022 Kubernetes For Laravel.